The art of online persuasion can be hard to master. With so many brands competing for attention, not using persuasion techniques (or using them incorrectly) can be the difference between success and disaster. Persuasion is a powerful tool: we like to think of ourselves as rational decision-makers, but more often than not it is intuition, emotion, gut feelings and impulsivity that actually drive our choices and behaviour.

A fascinating way to see persuasion at work is looking at political candidates’ websites during election times. Think of political candidates as brands who use persuasive messaging to foster awareness, promote a set of unique selling points and convert voters – just like any ecommerce website wanting to sell a product or service would. A few days ago, as I was following coverage of the American election saga, I stumbled upon a catchy pop-up on the website of likely US Democratic nominee, Hillary Clinton, right after her opponent Donald Trump had become the only remaining candidate for the Republican nomination: 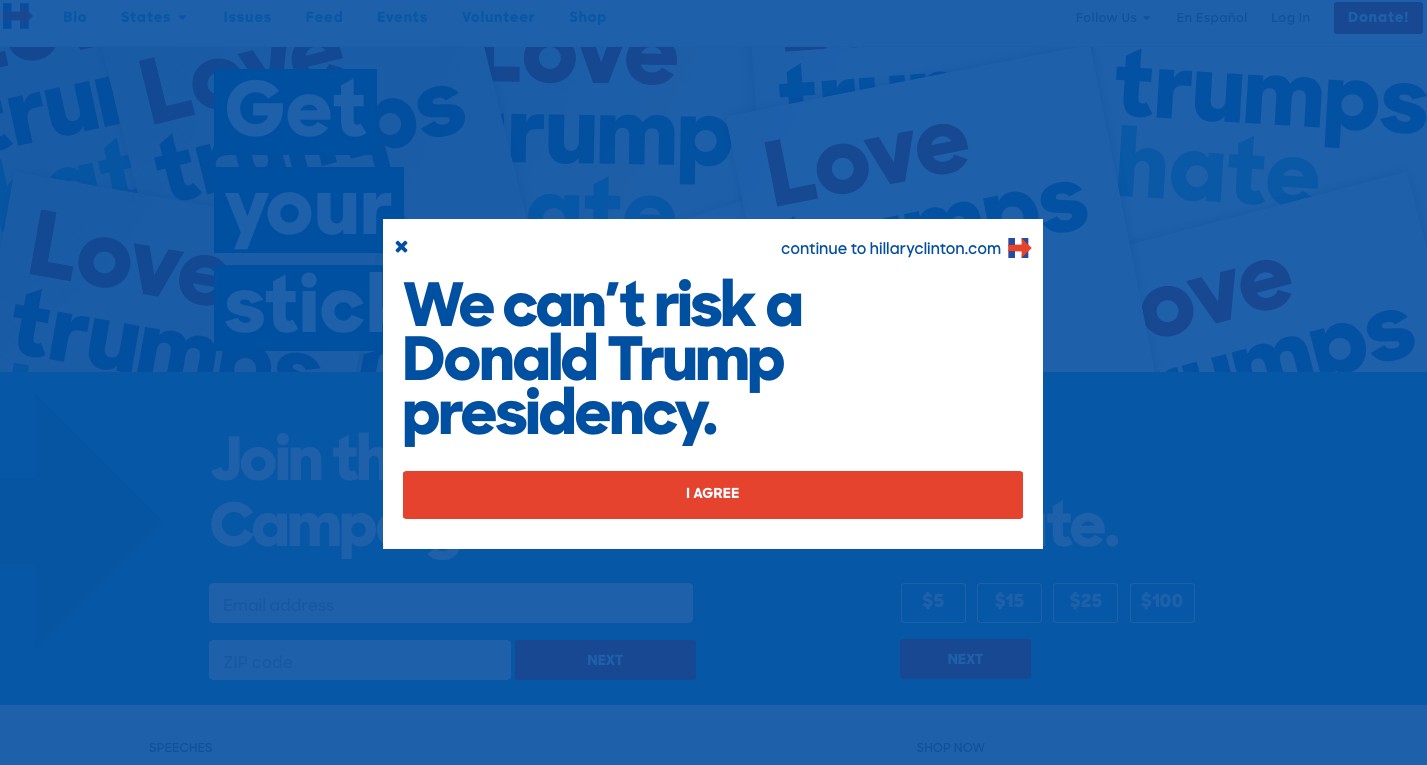 As an optimisation strategist, my job often requires me to investigate how persuasion is used on a website, and come up with data-driven, testable ideas to improve it. As I sat there looking at Clinton’s pop-up, my train of thought went something like this:

Ok. So, that’s a powerful opening statement. It’s bold. They are planting a clear idea in people’s minds and creating a sense of urgency and inevitability with the words “can’t risk”.

Then I looked at it again and realised it’s basic comparative advertising: discredit the competing brand to suggest yours is better. But Clinton supporters and/or Trump opponents already agree with this. If this is persuasive copywriting, who are they actually trying to convince?

Hmm. The pop-up is obviously aiming for a strong emotional reaction. They might be trying to capitalise on the shock of Trump’s nomination. Is this for disgruntled Republicans? For the undecided?

If it’s the latter, it’s not doing much to convince them. What benefits are they being offered, other than the comfort of a shared opinion? Still, the CTA is not over-committing, so it could be ok. Let’s click it! 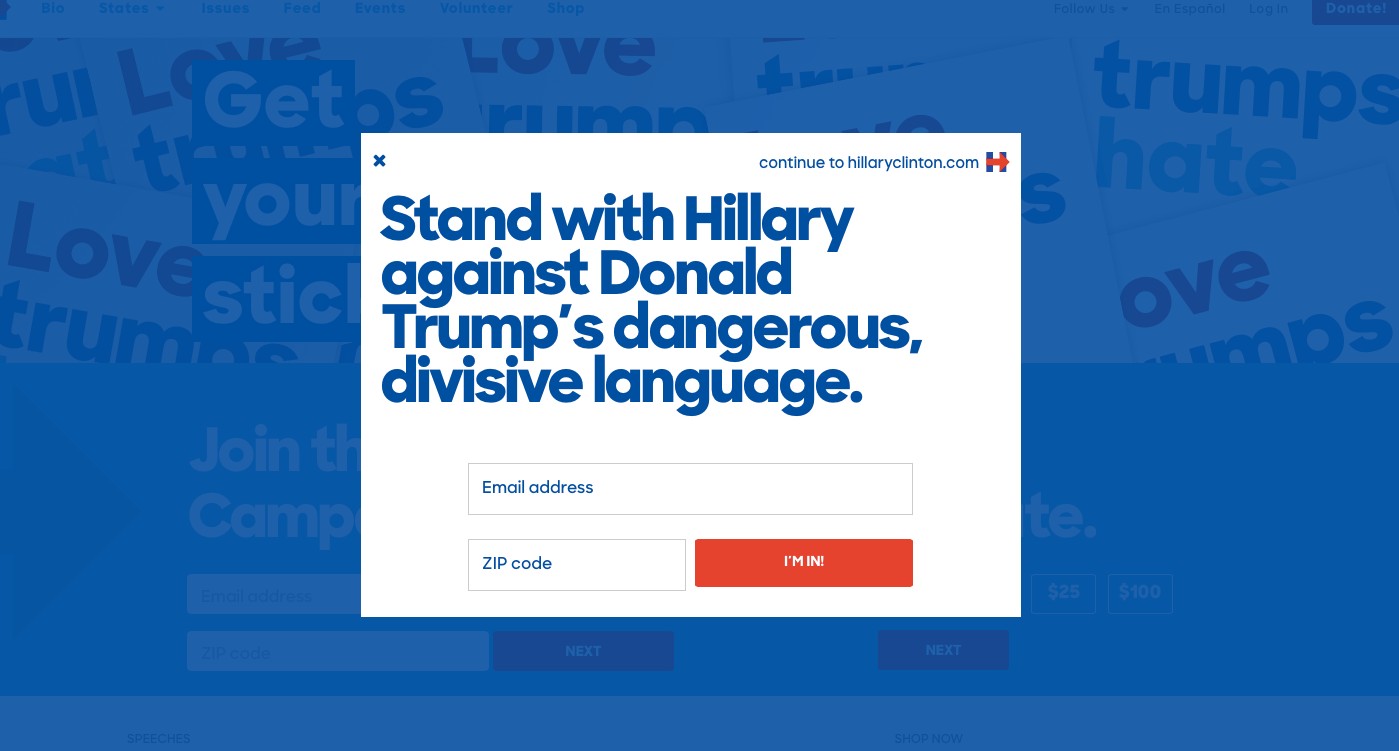 I will spare you the rest of the conversation I had with myself after seeing this second pop-up: all you need to know is that I spent a lot of time wondering how exactly persuasion was being used here, and for whom. On the one hand, the strong ‘us versus him’ framing would get people to commit to the enthusiastic “I’m in!” CTA; on the other, the copy reads weak: the word “language” rallies people against, at best, somebody’s controversial verbal feats. It’s hardly the compelling, emotionally resonant political point they could have made instead with terms such as vision, plans, ideas.

Also, if they keep talking about their competitor, they only increase exposure to his name. I am not sure this is a smart move, unless Clinton’s entire Unique Selling Proposition is, well, not being someone else. Perhaps, a more productive use of persuasive techniques would be to advertise her unique strengths and key policies, much like Trump has been doing quite successfully throughout his own campaign.

In short: I really don’t know what to think about this one.

But that’s the beauty of working in conversion optimisation, after all! In the grand scheme of things, my personal opinion matters very little. What really counts is data-driven A/B testing, which smart, customer-centric and forward-thinking brands are using to inform and shape the messages they publish online. I know Clinton’s website is running Optimizely, so I presume things such as form copy, page layout or CTAs are continuously being tested. This may be a bit of a stretch, but it is entirely possible that the two pop-ups above are the undisputed, statistically significant winners of an earlier round of A/B testing.

So here is a final thought: winning customers may not look like winning a presidency, but to an ecommerce owner the two things are not that dissimilar. If presidential candidates are harnessing the power of data and A/B testing to achieve their ultimate goal, why shouldn’t all ecommerce websites follow the same logic?

[First published on the PRWD blog]